The scoop on Andersen Windows

The scoop on Andersen Windows

Did you know there are more than 100 replacement window manufacturers trying to get your attention?

If you’ve dipped your toe in the replacement window buying process, this isn’t news to you. Shopping and comparing and pricing is a Herculean task. So because we’re the good guys, Hall’s team did your homework for you and narrowed the selection to the three best manufacturers and product lines in the industry.

We know you’ll agree with this choice!

The name you know

No doubt you’ve heard of Andersen Windows, the manufacturer that has been in the window business for 115 years, since a Danish immigrant set up his business to collect logs where they came inland on the St. Croix River in Wisconsin. Now headquartered in Baypont, Minnesota, where enterprising Hans Jacob Andersen found enough land to establish a factory in 1913, and the company began shipping a completely assembled casement window in 1932.  The famous “Victory window” introduced in 1941 used 97 percent less metal by weight and other material to support the war effort. 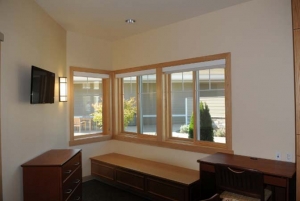 So history alone promises a solid commitment to quality. But Hall’s took it a step further to represent the 400 Series, which is the manufacturer’s most popular line with its longest-standing products. These are the epitome of wood craftsmanship, the attractive, timeless windows that make your neighbors look twice.

Beauty isn’t these windows’ only claim to fame. Andersen’s 400 Series stood up to Hurricane Sandy on the Jersey shore. Architect and owner Frank D. Mileto was deeply concerned about his multi-family building on Seaside Heights Beach along the Jersey Shore after four days of waves hitting the second level and the first level standing in 7 feet of water. But not a drop of water seeped in, he says, and it’s a story he heard from other professionals who installed these windows in the area.

Talk about a solid tradition!

Accolades matter, too. Andersen Corporation was awarded the U.S. Environmental Protection Agency’s Energy Star Partner of the Year–Sustained Excellence Award in 2018. It was the Green Builder Readers’ Choice 2017, and has been awarded Most Environmentally Friendly for six years running. They’ve partnered for two decades with Habitat for Humanity; beyond supplying the materials, Andersen employees often report to a volunteer site with their tool belts, ready to go.  And Andersen is a proud sponsor of United Way, American Red Cross, Junior Achievement.

No wonder Minneapolis’ Star Tribune ranked Andersen as one of the top places to work in the state.  Andersen is all about sustainability, and at Hall’s, we know this choice can preserve your peace of mind. Drop in to our showroom and let’s pore over the possibilities together!